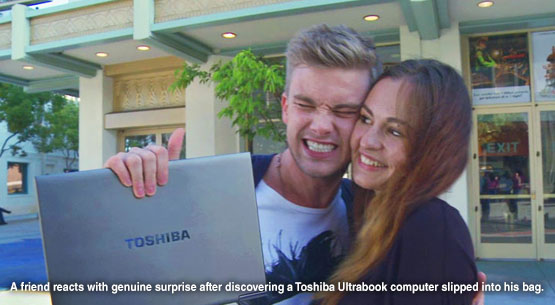 Ashton Kutcher's got nothing on Justin Havlik.

But when it comes to Ashton's greatest contribution to modern day pop culture – that would be Punk'd – he might have MTV, but Havlik has Jamie Kennedy and Michael Addis.

For those not up on youth culture, reality TV, hidden-camera hijinks and riveting documentaries about the seamy underbelly of doing stand-up (that would be Addis' 2007 doc "Heckler," an inside favorite of comics everywhere), Kennedy and Addis may need a bit of an introduction.  The former is the TV star and comedian who's best known for "The Jamie Kennedy Experiment," a half-hour comedy series which ran on the WB network.  The latter is his part-time partner in comedy crime; a talented, thoughtful and funny director who collaborates regularly with Kennedy when he's not out writing, producing or shooting his own projects.

The two of them are represented for advertising assignments by First Wave and have partnered with the company on a number of over-the-top ad projects, most notably a web series for Toshiba that artfully took the "Punk'd" modus operandi and played it for branded content laughs.

Havlik founded First Wave in 2011 after working as an EP at Grand Large. Prior to his production company experience he was on the agency side working as a producer – an experience he says helped him look at projects from a more holistic, start-to-finish approach.

Since its launch two years ago, Havlik has worked to distinguish First Wave by assembling a seeming orchestra of talent, rather than a grocery list of capabilities. So in concert with directors he also has a motion graphics and effects designer, a composer, a group of editors, etc.  The director corps is varied, and brings solid chops in the specialized world of reality-based content as well as in more traditional, scripted forms. Of the roster, the operative word to describe them is creative – as Havlik points out, when you have sketch comedy stars and reality TV specialists, they tend to function as creatives in their own right, often waving around hyphenated titles such as writer-director-producer.

There are other notables on the First Wave menu too, including director Michael Rappaport, whose "Beats, Rhymes & Life" documentary is a captivating portrait of the influential hip-hop group A Tribe Called Quest. Released in 2011 by Sony Classics, the film won the Audience Award at the L.A. International Film Fetival in the Best Doc category that year. Another top First Wave talent is Matthew Lillard, whose indie feature, "Fat Kid Rules the World," was released last year.

First Wave's Travis Satten is a rising star; a young music video specialist, he's got his finger on the pulse of urban society and knows his way around the documentary format, too.

Havlik describes First Wave as "a true hybrid, integrated company.  We not only have directors – and some pretty funny ones, I might add – but some amazing editors, a classically-trained pianist and the great music parodist Weird Al Yankovic." Weird Al?  Even Ashton Kutcher hasn't got that.

As with the talent list, the mix of work at First Wave is similarly diverse.  It leans towards agency work, with some additional direct-to-client projects as well as broadcast promotion mixed in.

Of its advertising jobs, many are longer-form branded web content gigs, while the rest are more traditional thirty-second TV spots.  First Wave director Michael Sugarman, for example, is just back from London where he directed a spot for The Richards Group and EA Sports' FIFA 14 videogame. Sugarman is a Harvard-educated filmmaker who counts among his favorite techniques the liberal mixing of comedy with both documentary and faux-documentary styles.  Some of the best examples of this work can be found in a series of comedy shorts he directed for the web video channel of The Onion, the humor site. Among the agencies First Wave has produced commercials and other ad content for include Goodness Manufacturing, Grey Worldwide, O&M, iCrossing, Siquis and others. When it comes to ad work, Havlik believes that First Wave's talent gives them a leg up in the reality space. "Guys like Jamie and Michael are kings of the comedy hidden-camera genre," he notes, citing their experience with the aforementioned TV series.

They turned this skill into a series of inspired web videos for Toshiba in late 2011 that Mashable  called "a sly piece of marketing."  The campaign employed real-life pickpockets who, with the aid of friends in on the gag, set up unsuspecting people in public places, slipping lightweight Ultrabooks into their bags without their knowing it.  Then a bogus security guard would come up and ask to search the bag, noting that there's been a recent laptop theft.  The looks of surprise on their faces when he pulls the computer out of bags they had in their own hands is what makes the whole campaign fly.

Havlik notes that while Kennedy and Addis often direct as individuals, when you put them together "they bring really great insight and knowledge to projects, and they're not afraid to push the envelope.  For them, the bigger the better when it to comes to pranks and stunts."

For Addis, the challenge of applying his comedic, documentary and short-form skills to ads and brands hold massive appeal.  "I get a real fresh excitement about the idea of enlightening and influencing people with my comedy in the context of branded content work," the director says.  "I mean, I know how to get laughs, but to actually persuade someone to make a decision about a brand rather than just smile – that's something I'm dedicated to."

The real-people hidden camera format is not without its tricks of the trade, Addis explains, adding that he and Kennedy put many of them to work on the Toshiba Ultrabook campaign.  "A lot of them are counterintuitive and very unique to the genre," he says, warming to the subject.  "The basic building blocks are creating a manageable scenario that you can cover effectively, and providing actors and real people with the guidance they need to deliver something that's going to pop off the screen while not blowing the gag."

Satten takes a different approach to the genre.  A graduate of SVA who moved into directing from the editorial suite, he parlayed a connection at the hip-hop magazine XXL to get a shot at directing a number of rap videos.  Since then his work in the genre has grown.  Among his recent clips is the acoustic version of "We Are Young" from FUN., which has racked up millions of online views.

He's got an equally sharp eye for documentary-style storytelling.  His other projects include a campaign for Jeep out of Global Hue that features New York Knicks star Carmelo Anthony and a series of web shorts for Harley-Davidson that follows filmmaker F. Gary Gray ("The Italian Job") and other members of a motorcycle club in L.A.

Satten is a big fan of the trend towards more reality-based production, and feels there's never been a better time to make docu-style content that reflects great production value.  He calls the way he approaches these jobs "hyper-stylized docu-narratives," as they're a mash-up of techniques – just the facts, if you will, presented with a dose of visual 'tude.

"One issue about the use of reality-based concepts in advertising, is that ideas are often not as robust as they can be," Satten says.  "Clients always say they want things 'simple,' but audiences respond to work that feels cool.  We all know what this looks like. It's the difference between filmmaking and what's essentially just videography."

First Wave is layered a bit differently than other production-through-post offerings, Havlik says.  What with his stable of directors, designers, effects artists, editors and composers all working under one banner, it allows clients and creatives to mix and match on an ad hoc basis.  "For example, we've worked on projects where the agency has opted to handle the post in-house," he says.  "And that's fine; we're open to all possibilities. Whatever the job requires to make it work from a creative, budget and timeline basis, we're there to help and support." To broaden its advantages in efficiency and cost – always a factor when handling branded content and longer-form web projects, Havlik notes – First Wave recently partnered with an established Manhattan company called IDC to offer a range of digital and post services.

A minority and woman-owned business, it's run by a firecracker named Marcy Gilbert who balances her sense of professionalism with non-stop quips and a homey sense that makes you feel like she's about to offer you a sandwich and a Coke along with your flash drive.

"I think our approach and our roster of talent fit perfectly in line with what IDC offers to create a real opportunity in the advertising space," Havlik says, pointing out that many big agencies are increasingly looking to take work in house to cut costs.  "Here at IDC we can offer them the same value and supervise the process from start to finish.  That will streamline the whole thing and keep costs down."

"Agencies really need to save money these days," he continues.  "Cost consultants are running wild.  Agency producers are pulling their hair out – if they have any left.  We all need to work together and still smile at the end of the day. And that's what we do.  We run a tight ship stocked with wonderful crews, and bring a human element to production and post.  We're vested in the projects and have services to fill all their needs." Clients say working with First Wave is a seamless experience.  Susan Rafter is a freelance producer who did a series of web shorts for UPS through the company.  They're funny, scripted 'edutainment' videos designed to demonstrate how UPS services can help small business owners.  Lightly branded, the agency was happy enough with them to enter them in the awards shows.

"Justin and First Wave did a great job on these," she recalls.  "Like a lot of these longer form web projects, they were a challenge to pull off, but we got all that we needed and more."

As the company nears its third anniversary, Havlik feels they're poised to start handling bigger, more complex projects.  It's hard not to share his enthusiasm, which along with his sense of humor is catching.  "We've been having a really good year and we've got some pretty ambitious projects lined up," he says.

Trying not sound like a cliché, he points out that they've got a documentary in the works that required him to sign off a non-disclosure, but otherwise he'd be thrilled to tell me about it.  "But if I did, I'd have to kiss you," he says straight-faced.  "Yes, I said kiss."  I guess I better pucker up. 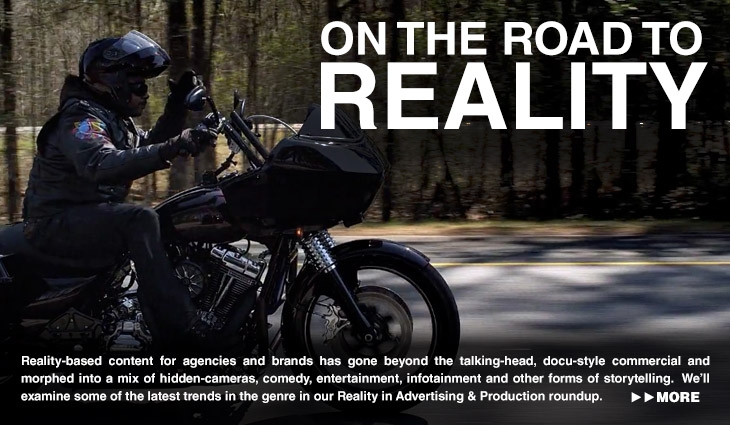 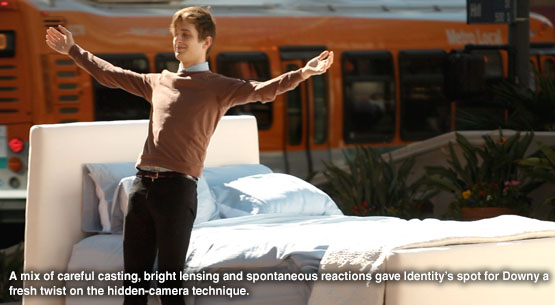 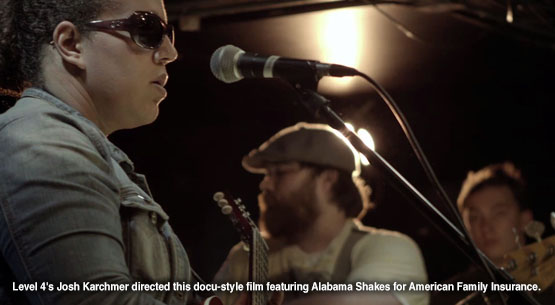